Why There’s So Much More To Medellín Than Dark Tourism 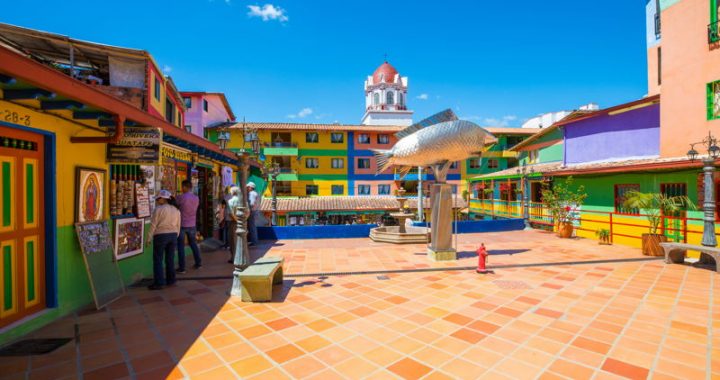 Why There’s So Much More To Medellín Than Dark Tourism

My Grandmother Loves This Place (And She’s No Dark Tourist)

“Dark tourism” is a supposedly new phenomenon. It’s what people call it when you visit a place just to ogle some tragic aspect of its history.

One of the newest additions to the world’s list of dark tourism sites is Chernobyl, recently opened to the public and now offering tours.

But, of course, the idea is nothing new… every place has some bad to its history, and they all capitalize on the negative for tourism—and, lest we forget, for education. Those who know not the past are doomed to repeat it, as they say.

Nazi prison camps have been open for tours for decades, some since just a few years after their liberation—long before anyone called visiting them dark tourism.

Ever been to the Coliseum? Or Aztec pyramids? Both were sites of human sacrifice, yet thousands of parents take their kids and pose for family vacation photos every year.

And many more of the most famous tourist sites—including some of the world’s wonders—are essentially graves. The pyramids of Giza… the Taj Mahal… yet the millions who pose for selfies in front of them aren’t called morbid for doing so.

The idea of dark tourism has recently become so popular that there’s even a Netflix show called “Dark Tourist,” following a journalist who ventures to some of the world’s most well-known dark tourism sites.

In the first episode, he visits Medellín, Colombia, long famous only for its violent and drug-riddled past. I’ve been visiting this beautiful city for about a decade now, and, for just as long, we’ve been talking it up as a great place not just to visit but to live. But, apparently, some folks are just catching on—and they’re only coming because of another Netflix show: “Narcos.”

Colombians aren’t too happy with the trend. Yes, come visit, they say… but come not just to see the neighborhoods featured in the show, not just to take pity on a past long behind us, not just to be able to go home and brag to friends, “I went to Medellín and survived!”

Come to stroll the tree-lined streets… sip a coffee at a riverside café… take a leisurely jog through one of our plentiful flower-strewn parks… dine out at one of our trendy, world-class restaurants… visit and learn from one of our many museums, the science center, or the botanical gardens… take part in our colorful, vibrant festivals, full of music, fireworks, and family fun… dance the salsa on the sidewalk as a live band jams on the corner…

There’s so much to keep busy with here, there’s no need to delve into the grimy past for cheap thrills.

I’ve heard from countless readers over the years who had to see the place for themselves to believe it—this place is no joke, it really is as idyllic as so many have said.

Perhaps none was so convincing as my own grandmother…

She’s a proud patriot, a veteran’s widow, a staunch Republican, a devout Catholic, and a country girl at heart. She’s been to Europe… she loves Britain and Ireland, but Italy is probably her favorite place in the world outside of America—the home of the Pope and the center of the Catholic world is hard to compete with. Plus, pasta!

Latin America never held much appeal for her… she never wanted much to visit Panama, only making the trip to visit her loved ones, not to be a tourist. Well, the U.S.-built Panama Canal did hold some fascination—after so many had failed and the red, white, and blue had prevailed—how could any good American not be proud? Her husband had been an engineer, too, so she also felt she was seeing it in his memory.

But to go on to Colombia with us after? Were we out of our minds? What interest could it possibly hold for her? Why on Earth would she want to enter this den of vice and corruption?

Good sport as she is, though, she gamely went along.

And she fell in love almost at first sight.

The weather went a long way toward making her feel comfortable. She loves a cool, breezy day, and Medellín has nothing but those. After the oppressive heat of Panama City, she was glad for the respite.

After the climate, it was the people she noticed and took a liking to, “So friendly and polite, even though I can’t speak their language! Everyone is always smiling at me.”

Acting as her translator, I interpreted several conversations between her and those we encountered. Everyone wanted to know how her visit was going and if there was anything they could do to make her stay more enjoyable—they all wanted her to leave with the best impression possible. This is the norm here… locals are keen for their city to overcome its reputation. The best way to do that is to make sure that foreigners take home good impressions.

The hilly nature of the city grants lovely views from pretty much anywhere you look—she loved sitting on our balcony with a cup of fresh, local coffee, enjoying the expansive panorama of valleys and bluffs. Or watching a storm move in dramatically over the slopes. We visited over New Year’s, and she and I were the only ones still around at midnight when the entire city lit up with fireworks set off from every household. It’s a memory we’ll both cherish forever.

We spent several days touring churches and museums, and visiting the book fair that happened to be in residence at the botanical gardens while we were there.

The gardens afforded us another chance for a lifelong memory—walking down one of the empty footpaths from one exhibit to another, we heard a loud crashing through the jungle greenery, followed by a serious thud behind us. We both jumped, then turned wondering what could have made the racket. Who should be sitting just a couple of meters away but a six-foot-long iguana—the same one we’d been marveling at in his tree perch not a minute before.

The sleepy fellow must have dozed off and lost his purchase, falling unceremoniously to the ground. Once the shock wore off, neither of us could stop laughing. He stared back at us with half-lidded eyes, apparently not too perturbed by his fall from grace or the witnesses.

When it came time to leave, she was sad to say goodbye…

If my ultra-conservative grandmother can get over her preconceived notions, anyone can.

Come to Medellín to have fun and make precious memories… not to wallow in her short-lived but long-remembered history.

Those of you who attended our Live and Invest in Colombia Conference in the city last week got a close-up feel of what life here is really like. And, when your mind has time to settle from all the information our experts shared, I hope you’ll find the right Colombian opportunity for you.

If you weren’t lucky enough to be with our team of Colombian experts and expats last week… to hear all about the latest opportunities for part- or full-time living and/or investment in Medellín and beyond… don’t forget that you can get your hands on a copy of our 2019 Live and Invest in Colombia Home Conference Kit.

As our team puts the final touches to the kit, the general readership can avail of a special pre-release discount of 53% off. However, as a LIOS Confidential reader, you qualify for an even better deal…

Pre-order your copy of this ultimate Colombia resource today, and you’ll enjoy an additional US$20 off of the price… for a total savings of nearly 60%!

When you do, you can access our complete library of Colombia resources, including a set of reports and the entire bundle of live presentation recordings from last week’s Live and Invest in Colombia Conference, for a tremendously discounted, limited-time price.

Be warned—this discount expires at midnight this Wednesday, July 24.

If you’re at all curious about Colombia, claim your copy here now. Simply use your Private Coupon Code CHCK20 when ordering to avail of your exclusive discount.