Christmas In Colombia: Celebrating The Festival Of Lights 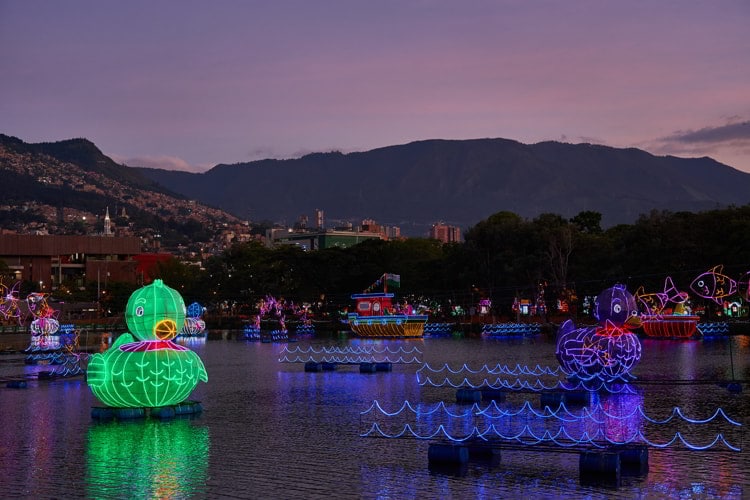 Christmas In Colombia: Celebrating The Festival Of Lights

I’ve been spending Christmas abroad since 2001 and have come to love the traditions and celebrations that take place throughout Latin America.

Christmas in Medellín is the most impressive extravaganza I’ve experienced.

My first half dozen Christmases overseas were in Ecuador and were the most enjoyable Christmas experiences I’d had in many years, probably since childhood. My home city of Cuenca was not exactly a small town, but celebrating Christmas there certainly had a small-town feel.

It was the first time I’d experienced all the events, parties, camaraderie, and celebrations of Christmas without the Black Friday woes, gift-buying frenzy, and deluge of forecasts for the economic outcome of the Christmas season.

In Uruguay, Christmas occurs in midsummer and is the unofficial kickoff for the beach season. Punta del Este, which is a world-famous beach resort, was probably the least Christmassy place I’ve been. Everyone’s focus was on sun, sand, and barbecue. The professional fireworks that every home seemed to have, however, were impressive… especially at New Year’s, when gunpowder hung in the air like a thick fog.

In Medellín, Things Are Different

There’s a full agenda of exhibits, cultural events, shows, and celebrations. But what sets the city apart this time of year are the lights.

Medellín, led by the local utility, EPM, employs thousands of temporary workers over a period of months to decorate downtown with millions of lights in preparation for the grand lighting on Dec. 1. The event is called El Alumbrado, literally “the lighting.”

The celebration is a tremendous source of pride among the people of Medellín and enjoys broad public participation and support. Everybody gets out and enjoys the festivities.

El Alumbrado started in 1955, sponsored by EPM and the local municipality. It was a modest celebration in the early years but has steadily progressed to become the extravaganza it is today, drawing visitors from around the world.

El Alumbrado’s traditional kickoff date was Dec. 7, a Colombian holiday called Día de las Velitas (Day of the Little Candles), held on the eve of the Immaculate Conception. But, since 2011, the lighting has gradually crept back to accommodate the large tourism influx into the city for the occasion. This year it will run until Jan. 9, drawing more than 4 million visitors.

For this grand event, the city installs almost 500 miles of light strings with more than 30 million bulbs at a cost of around US$10 million. The effect is amazing.

Historically, the festival has been staged along the river. However, last year and again this year the location has been changed because of ongoing construction. The setting this year is Carabobo Norte. The route extends around Parque Explora and inside the Parque Norte amusement park.

I’d say there’s no better time to visit Medellín than right now. It’s downright Christmassy, despite the invitingly warm weather. With the abundance of events and festive atmosphere, I can’t think of a better place to celebrate the season.

The Live and Invest in Colombia Conference is a three-day, in-person event hosted in Colombia. It’s the only event of its kind.

You’ll get to know all of the country’s regions—for adventure, investment, and living…

Along with the professionals who work here and the expats who live here. You’ll get a comprehensive, in-depth view of Colombia that outsiders, tourists, and snowbirds simply don’t know about.

You’ll leave with the knowledge, support, and confidence you need to make important decisions about your future in Colombia.

In fact, it was the World’s Best City Option For Overseas Retirement.
This overlooked destination checks every box:

What are you waiting for? In incredibly beautiful and affordable Colombia, the sun is shining, and the future is bright. You owe it to yourself to come see for yourself. Register here now.