How To Celebrate A Traditional Christmas In France 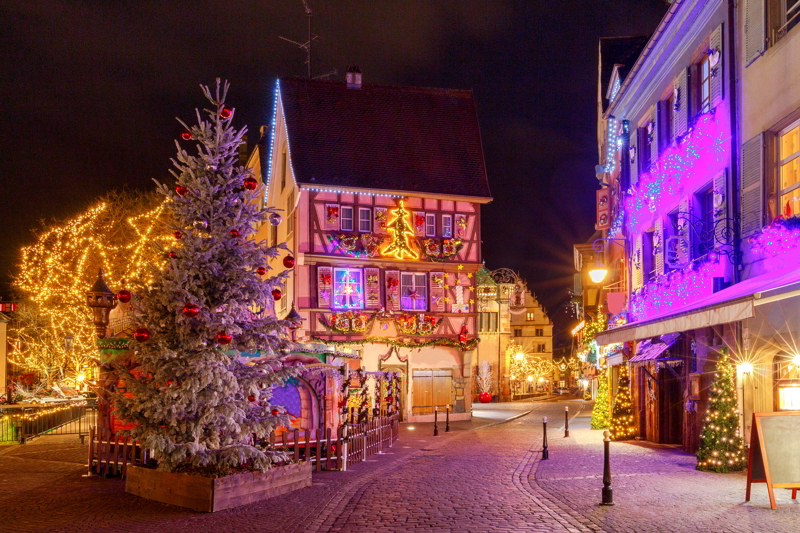 How To Celebrate A Traditional Christmas In France

Got The Stamina For A Traditional French Christmas?

Paris has been alit since Nov. 24, give or take a few days depending on the quartier. The city’s Christmas streetlights bring a familiar cheer to strange times. It’s not the same this year as in years past, but there’s a festive feeling in the air despite lockdowns and curfews, masks and meter distances.

Most Parisian stores are too small to accommodate more than a few people at once in the best of times. Nowadays, many hole-in-the wall boutiques are only legally allowed one or two customers at a time, leaving the rest queuing in the cold. Even those that can accommodate more inevitably have lines these days with the Christmas gift rush in full swing. Some stores hand out petits chocolats to those in line, each standing at a line sprayed on the pavement.

At least stores are open, though. My heart goes out to those in the restaurant industry that has been shut down for what feels like half the year. Increasingly, though, cafés are adapting to the new circumstances, offering daily menus by take-out… and sometimes delivery. It’s gratifying to finally be able to have a good restaurant meal, but it’s not quite the same when you’re eating it at home.

Most businesses are still obliged to shutter themselves for at least another few weeks. That means no museums, movies, theater, skiing, or anything else you’d do in a crowd of people.

I’m happy to say, however, that we are allowed to travel domestically for the holiday, and I’ll be spending my daughter’s first Christmas in Chamonix, the popular ski town in the Alps. There will be snow if not skiing, and rich cheeses to be had at home if not fondues at cozy restaurants.

I’d love to say that I’m espousing my adopted homeland’s holiday traditions… but I have to admit that I just don’t have the stamina for it.

A typical French Christmas begins at midnight mass on Christmas Eve, which is followed by Christmas dinner. If done right, it could be many courses over several hours, with coffee finally poured at about 4 a.m. Once dinner has been dispatched, gifts are opened. Presumably everyone falls asleep around dawn.

The next day is quiet and sleepy, with most in their beds until well past noon. An understated brunch-type meal might come mid-afternoon, possibly the only compromise the French make for the whole year to their normally rigid mealtimes.

A book I recently read by an American who married a Frenchman described her first Christmas with her in-laws. It sounded like a special kind of gastronomic torture to me. She managed to convince her adopted family to accompany her to the movies on Christmas afternoon—a tradition for so many American families—and they grudgingly obliged her. But the French seem to not do much on Christmas Day left to their own inclinations… the presents are opened, the special meal has been had… what’s left?

It seems that what remains is a day to indulge in a grasse matinée, literally a fat morning—the wonderful expression that we seem to have no matching idiom for in American English. Brits would call it “a lie in.” Americans might say they’d sleep in… but the lie in and the grasse matinée hint tantalizingly at a much more indulgent affair that has nothing to do with sleep. Lazing around, the day is given over to rest and relaxation… and perhaps to coddle a guele de bois, literally a wooden mouth (a hangover).

Christmas Eve And Christmas Day For Me

Panama and most other Latin American countries have similar Christmas Eve/Day programming and I just can’t get into it. I’m usually asleep by 10 and can barely make it past 11 when I try. Even if I were more of a night person, though, I still wouldn’t be able to get behind this tradition. For me, it cancels out everything I love about the lead up to the big day.

Christmas Eve, for me, is the best part of the whole thing… that anticipation for the next day. I still remember the feeling of being too excited to fall asleep when I was a kid. Now that I have my own, that childlike thrill is back.

The delayed gratification is what waiting for a holiday is all about… and my mind has been trained for too many years that the big payoff doesn’t come until you make it through Christmas Eve night.

For these countries that celebrate around a different holiday calendar, the expectations are completely upended to a typical North American… but the anticipation is baked in nonetheless.

This kind of Christmas Eve tradition is linked more directly to religion and how the church encourages Christmas to be celebrated—with a Christmas mass as the lynchpin—so any strongly Catholic country tends to celebrate this way.

But in Latin America, the dinner comes before the midnight mass… and presents come right after. Christmas Day is just as boisterous as if it were the main event, with fireworks and parties throughout the day.

I just can’t fathom the sadist who decided that the French must not only attend the midnight mass, but they must stay up for a formal meal afterward. I suppose it’s for this reason that the French aren’t raucously celebrating the next day, as Latinos are able to.

I won’t be staying up on Christmas Eve in solidarity with French fellows in Chamonix… but I make up for this omission by heartily embracing the French traditions that do appeal to me: seafood as part of Christmas dinner is the most beloved French-adopted tradition in my family.

Wherever you are in the world this holiday season, I hope you’re able to enjoy some, if not all, of your adopted home’s holiday traditions…