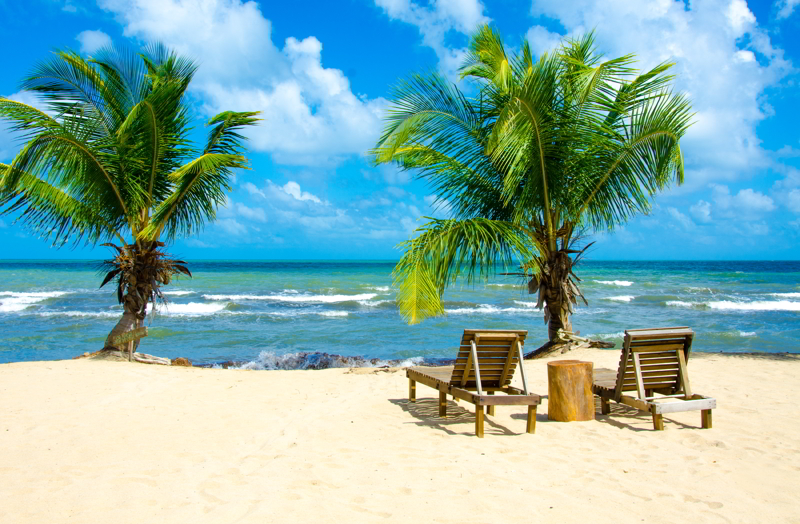 It’s gray, dark, and rainy here in Paris… and it’s unlikely to change much over the next couple of months. It’s around this time of year that I’d usually try to organize a trip to someplace sunny.

In fact, every January we hold our annual in-country Belize conference, and it’s hard not to let the mind wander down to white-sand beaches and clear, lapping waves… especially as we’re currently prepping to host this Belize event digitally for the first time ever.

This time last year, our staff and the conference attendees were packing suitcases with bathing suits and sunhats. The word “coronavirus” had barely been heard outside of China and it would still be several weeks before the world went into a tailspin—including our own conference department, who had to hustle to figure out how to deliver our live events to you via your computer screen.

Over the last year, we’ve become old hands at this virtual conference gig. The disadvantage of virtual events is that we aren’t able to meet you in person, and you’re not able to catch us over a cocktail to pick our brains. You’re also not able to meet your fellow attendees in person, those like-minded souls who have the same ideas and goals you have—a hugely valuable comradery to develop, especially if your own family and friends aren’t quite as enthusiastic about you leaving the country as you are.

Nothing beats personal contact, and hopefully by January 2022, we’ll all be heading down to Belize together again. Meantime, we’ve pulled out all the stops to make ourselves and our speakers remotely available to you, and we’ve organized ways for you to get to know the other attendees through our virtual cocktail party. (You can get all the details on what’s planned for this year’s Live and Invest in Belize Virtual Conference here.)

It’s been a while since I was down in Belize, but I just came across a story from a Belize expat that I’d like to share. Cathy Thayer describes her experiences moving to Belize, and I love her take on it:

Discovering A New Life In Belize

“After 32 years of marriage and four children, my husband and I were retiring to Belize in six weeks…

“Being married 32 years and raising four children results in a lot of stuff. What were we going to do with all of it? Our plan was to move to Belize for a year, to try out the idea, so we decided we’d take six of everything with us. The rest we’d put in storage.

“Then we showed up and unpacked our six of this and six of that. Now what?

“Our first two challenges in Belize were food and relationships.

“How do you go about finding food in this country? Don’t laugh. It’s not all that easy. You start with the Chinese grocery stores. All the grocery stores in San Ignacio and Santa Elena, the ‘twin cities’ of Cayo, are owned by Chinese. They stock basic supplies and also some imported goods. What we imported from the States cost about twice what they cost back home, so we don’t buy them. We keep our costs down by buying either local packaged goods, or from Mexico.

“For produce, you go to the open-air market. Find a vendor you like and get to know them, ask their name. We’ve gotten to know a very nice lady. She gives us good deals, teaches us about Belizean fruits and vegetables, and shows us how to prepare and eat some food we had never seen before.

“Here’s another tip: If you see something in Belize that you want, buy it. It may not be there the next week. I learned that the hard way.

“Back in the States, I didn’t cook much. Here, I realized quickly, I had no choice. I went online for recipes, started cooking, and realized cooking is something I actually enjoy. I’ve also discovered that I like to wash dishes. It’s hard to find dishwashers here. If you build your own home, you can import one to install in your kitchen, but rentals aren’t going to have them. So I learned how to do dishes. I had to go online. Seriously. I never washed dishes by hand before. A dishwasher sterilizes, and that’s what you need to do when washing dishes. I learned this the hard way after getting a parasite. When I went to see the doctor, he gave me some instructions on washing dishes and preparing food.

“Belize doesn’t have fast-food restaurants. I like that. Belize does have fast food, though. It’s called beans and rice or rice and beans, and they’re not the same thing. Beans and rice are mixed together; rice and beans are separate. Try it either way with ‘stew chicken,’ as Belizeans call it. It’s great.

“The other big thing we had to figure out when we got here was maintaining and creating relationships. My family, our kids—everyone thought we were crazy for doing this. ‘You’re going where and why?’ they wanted to know. Staying connected with friends and family in the States who didn’t understand what we were doing was the first challenge we faced.

“The second challenge was meeting new people. This part was easier to navigate because it’s easy to meet new people here. I thought I had a lot of friends in the States, but we have many more friends in Belize, all different, interesting kinds of friends. Not just people like us, in our age group, in our church, or at our gym. I’m talking diverse ages, ethnicities, and mental health (no kidding!).

“When I moved to Belize I decided I was going to be outgoing. Being shy when making a move like this is just not an option. As soon as we arrived, we started going to every expat event we could find.

“Once a week, we shoot darts. My husband had never played darts in his life, but in San Ignacio there is an open-air bar with New Jersey-style pizza. A couple of people from New Jersey make the pizza and provide free beer. You can’t beat it.

“We also go country line-dancing. There are a lot of people here from Texas who think that country dancing is the only way to go.

“We go to potluck lunches and dinners.

“All of these activities are done with different groups of people. In other words, there are a lot of expats living in Cayo—many more than we would have guessed at first.

“We’ve gotten to know so many people here, and these relationships are taking the place of what I used to distract myself with. We used to go to the movies or watch TV. We don’t do those things here. Winter in northern Idaho, where we’re from, is cold. For seven or eight months out of the year, people cocoon in their houses because it is freezing. Everyone is isolated for much of the year. Here it is beautiful year-round, and everyone is outside all the time.

“Of course, it’s not all sunshine and flowers. Some challenges are ongoing. In the area where we live, the internet is beyond slow. In other areas of the country, the internet is better—not superfast, but a whole lot faster than what we’ve got. It depends where you choose to live.

“Electricity and gas are expensive. On the other hand, a lot of other things are cheaper here than they would be in the States. A big example is medical care. We have paid half or less than we would have paid in the United States for different kinds of care. David has even had surgery here, which was very successful and very affordable.

“So here we are at the end of our trial year. What are our plans now?

“We’re staying put. We have no intentions of returning to the States. We love it here.

“I came to Belize with the idea that I would suffer through a year for my husband. It was his dream, so I agreed to give it a try. Now it’s my dream. I feel like this is my dream come true, a dream I didn’t even know I had.

“This year in Belize has taught me that I can do anything I want. A year ago, I didn’t feel that way. A year ago, I felt my life was over. I was quitting a job that I loved to sit at home. Belize has changed everything. Here in Belize I’ve made new friends who are just as close to me as family. Belize has given me a second chance… a whole new life.”

If you’d like to hear stories from more expats living the good life in Belize… and find out if this could be the place for you (even just part-year to escape North American winter)… don’t miss your chance to join us, this Feb. 17–19, for our Live and Invest in Belize Virtual Conference…

The Early Bird Discount is still available… and as a LIOS Confidential reader, you save an extra US$50 off with Coupon Code BELIZE50.

Go over here now to claim your seat.