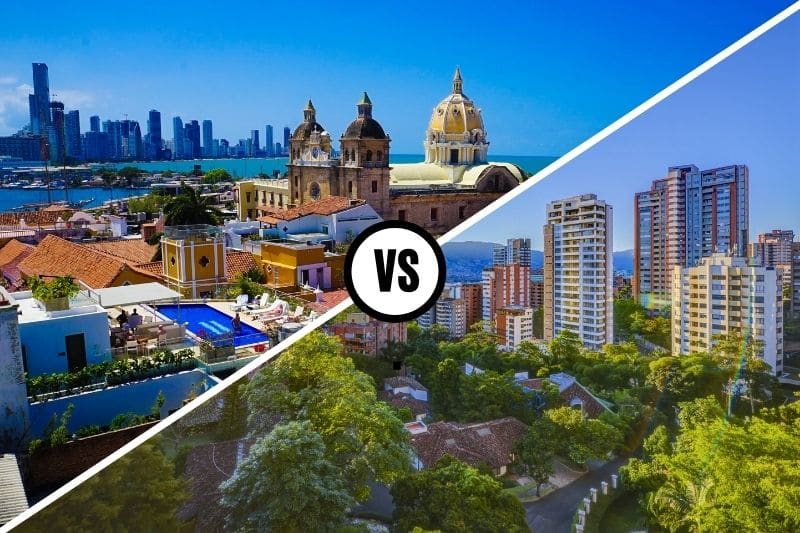 Medellín versus Cartagena… which is the better city for living and investing?

We hear this question a lot, so today I’m going to take an in-depth look at the respective strengths and weaknesses of these cities… both with much to offer.

Cartagena is a historical resort city located on the Caribbean coast.

Medellín sits in a cool valley in the Andes mountains.

Both cities have their fans.

I have lived in Medellín for more than 7 years, and I have traveled to Cartagena over 20 times for both business and pleasure. In fact, Cartagena was the first city I discovered in Colombia back in 2006.

Let’s take a look at how they compare, in 14 specific categories…

In Medellín, the average daily high temperature is about 82°F and the average low about 62°F.

In Cartagena, the daily high averages just under 89°F and the low about 75°F. The record-high each year in Cartagena is typically around 104°F.

Both cities have almost no seasonal variation.

Due to the hotter climate, air conditioning is definitely needed in Cartagena, but in Medellín you can do without it.

Medellín wins this one.

Medellín is a much bigger city with a metro population of over 3.7 million, so naturally it has more in the way of restaurants and nightlife.

Cartagena is a tourist destination (population 1.2 million), so it has more restaurant and nightlife options than you might expect… but not as many as the city of Medellín.

One area where Cartagena beats Medellín is in seafood restaurants. Because Cartagena is on the coast, you’ll definitely find more and better seafood here than in Medellín.

Cartagena wins here. Cartagena is one of the oldest cities in the Americas, founded in 1533. In 1984, Cartagena’s colonial-walled city and fortress were designated a UNESCO World Heritage Site.

Cartagena has had an interesting confluence of cultures over the past 500 or so years, including influences from the Spanish, Indigenous, and Africans.

Medellín is a younger, less diverse city that never enjoyed Cartagena’s prominence, so the culture and the lifestyle are more contemporary.

Medellín takes this category. Properties I have seen in Cartagena (off the beach) tend to rent or sell for at least 30% more than in Medellín… or even more than that. For sure, beachfront properties are more expensive.

Electricity costs in Cartagena are typically at least 60% to 70% higher than those in Medellín, due to the need for air conditioning.

Other costs like groceries and restaurants tend to be at least 5% to 15% cheaper in Medellín compared with Cartagena.

In general, Cartagena is a more expensive place to live than Medellín.

This one’s arguably a tie. In both cases, you have many things to do in the city as well as plenty of things to do nearby.

Cartagena is a city on a beach, meaning it offers water-related activities that aren’t found in Medellín. This includes boat trips to nearby islands (particularly the 27 islands of Rosario), scuba diving, deep-sea fishing, and so on.

As one of the oldest cities in the Americas, Cartagena also has many historical sites, including the walled city and Castillo San Felipe de Barajas.

Medellín arguably wins here. Medellín ranked much higher than Cartagena in a recent survey where 12,548 Colombians were asked how safe they felt in their barrios (neighborhoods) and cities.

In this nationwide study, Medellín came in first. Citizens feel safest in Medellín’s barrios, with 75% of respondents feeling secure. Cartagena ranked worst, with only 30% of respondents in Cartagena feeling safe in their barrios.

The tourist areas of Cartagena, including the walled Centro Histórico, Bocagrande, and El Laguito, are safe—but take caution after dark when the streets are quieter.

Medellín wins here. Medellín has eight of the top-rated hospitals in Latin America—Cartagena has none. As the bigger city, Medellín also has more medical and dental providers.

Medical costs also tend to be higher in Cartagena, in my experience.

Cartagena wins here. The World Health Organization (WHO) recently reported that Medellín ranks #9 on a list of the 10 most-polluted cities in Latin America.

Located in a valley, surrounded by mountains that don’t allow easy movement of air in and out, pollution tends to stay in Medellín’s metropolitan area… but fairly regular rain helps to clean the atmosphere.

Cartagena is located on the coast and benefits from frequent ocean breezes that help keep the air clean.

Cartagena wins here. Traffic in Medellín is generally much worse than in Cartagena. A recent survey by Waze rated Medellín as one of the worst cities in Latin America in terms of traffic.

Traffic can get bad anywhere in Medellín, but the worst traffic is found in the El Poblado and Envigado neighborhoods during rush hours.

The traffic in Cartagena is nothing by comparison.

10. Access To The States, Europe, And The Rest Of Latin America

Medellín wins this one, although both cities are serviced by the same U.S. cities (Atlanta, Fort Lauderdale, Miami, and New York).

Medellín’s airport is the second largest in Colombia, with nonstop flights to 13 international locations in the United States, Europe, and Latin America.

Cartagena offers only seven nonstop international flights, with nothing going to Europe.

Domestically, you can fly nonstop to more than 30 cities in Colombia from Medellín, but to only 9 from Cartagena.

Medellín wins here. Medellín is a much bigger city with more job opportunities than you’ll find in Cartagena.

But even in Medellín there still aren’t a lot of work opportunities for foreigners, especially if you don’t speak Spanish fluently. The best jobs in Colombia typically require Spanish at a fluent level.

Medellín takes this one. Unlike Cartagena, Medellín has an extensive metro system with integrated metro trains, a new tram, buses, and cable cars. The Medellín metro is spotlessly clean, easy to use, and inexpensive.

Both cities have extensive bus routes and inexpensive taxis. But unlike Medellín, the taxis in Cartagena don’t have meters, which results in gringo/tourist pricing by the drivers… something that can’t happen in Medellín, thanks to its metered taxis.

Taxi drivers in Cartagena can demand ridiculous rates from tourists if not negotiated in advance, so always establish the price before you get in.

Medellín wins here. Mosquitos and other bugs can be a problem in Cartagena. Medellín is at a high elevation so it doesn’t have many bugs.

In fact, mosquitos that spread the Zika virus are reportedly fairly prevalent in Cartagena, so take precautions and use insect repellent. It is possible to find these mosquitos in Medellín, but it’s rare. Most cases of Zika reported in Colombia have been at lower elevations.

I have lived in Medellín for more than six years, and I sleep with the windows open. I have never seen a mosquito.

Medellín wins when it comes to education. As the bigger city, Medellín is home to more than 30 universities, while Cartagena only has a handful.

I found only one bilingual international school for children in Cartagena, while I know of two in Medellín.

In our Medellín versus Cartagena comparison, Medellín beats Cartagena in 10 of our 14 categories. Cartagena beats Medellín in three categories, and the two cities tie in one category.

If all categories were equally weighted, Medellín would clearly win.

However, in reality, the categories should not be equally rated. To determine which city is best for you, you have to put a higher weighting on the categories most important to you.

For example, if cost of living, a springtime climate, health care, and public transportation are most important, Medellín wins. But if you want to be on the beach—with history, culture, light traffic, and low levels of pollution—then Cartagena is the choice.

Where Cartagena really shines is when you compare it with other Caribbean locations. The lack of hurricanes and the low prices (especially thanks to the current favorable exchange rate between the Colombian peso and the U.S. dollar) make it an attractive alternative when compared with the rest of the Caribbean.

I have spent much time in both cities, and each has its pros and cons. The only way to know which city might be the better choice for you is to spend time in both.