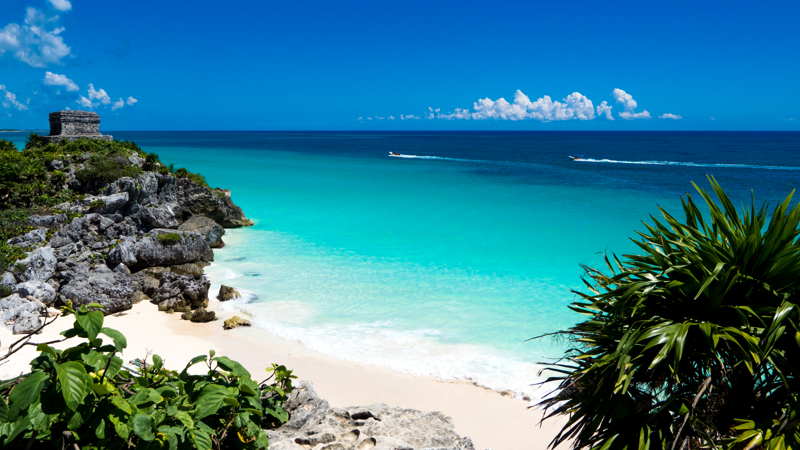 On Mexico’s Yucatán Peninsula, there’s about an 80-mile stretch that’s become known as the Riviera Maya. It unfolds roughly from Cancún to the Sian Ka’an Nature Reserve, which begins right after you pass through Tulum.

This region has been on the map for decades and has evolved in the time since it was first discovered by foreigners in the 1970s. Today the area offers many lifestyle options, something to please just about anyone looking to live by the beach. As you drive down Carretera 307, you trace the path of progress. The route begins in Cancún, the one-time fishing village that was slated for development by the Mexican government in 1970; at the time it had fewer than 200 residents. The Mexican tourism board, INFRATUR (now FONATUR), spearheaded and planned the city development, and back then expats were mostly European, coming from all over the Continent. Americans and Canadians began settling over the following decades, too, but more slowly. Eventually Cancún became overly saturated and many expats headed to Playa del Carmen, just 42 miles to the south.

Today Playa del Carmen is well developed and, once more, some residents are heading south again, looking for something quieter. Twenty minutes down the highway, Tulum is now the next expat destination on the route, and, relatively speaking, it’s just begun its development.

These two towns are so close to one another, you’d think they can’t be very different, but they offer two completely different lifestyles…

Given the nearly 50-year development of the region, it’s not surprising that the infrastructure is impressive. The roads are high-quality, perfectly maintained, and even landscaped along the way. The highway south may as well be a continuation of an American highway. Everything here is neat and orderly—from the roads themselves to the way people behave on them. But once you get to Tulum, this polished feeling begins to fade.

The highway through Tulum is the same one, but the landscaped surroundings give way to open fields, ramshackle buildings, and offshoot roads that are dirt as often as they are paved. There are islands of First World-level construction throughout the town, but it’s by no means the norm.

The highway is dotted with familiar names: 7-Eleven, Starbucks (with drive-through), Sears, Walmart, Home Depot, Costco, Sam’s Club… For the most part, these stores are replicas of their forebears north of the border; shopping would be a familiar thing here. All of these shopping amenities are found more frequently the farther north you are, though. If you’re living in Tulum, you’ve got to head back up to Playa for a Walmart. For those who like Tulum, this is a good thing—they want to keep the rustic feeling that they were looking for when they found Tulum.

Playa del Carmen is essentially a boardwalk town. Once a small fishing village like Cancún, a port was built in the ’70s that offered passage to divers headed to Cozumel Island to explore the Great Mayan Reef. Playa has grown slowly since then, becoming what many claim to be the vibrant heart of the Riviera Maya.

Today Playa has about 150,000 residents (an estimated 10,000-plus of whom are foreign) and is a bustling little beach town. La Quinta Avenida (called simply, La Quinta) runs parallel to the beach and acts as the city’s pulse, separated from the ocean by just one sandy block. This boardwalk-like street is crammed with bars, restaurants, stores, galleries, hotels, and real estate offices, with music wafting out of every doorway. Many bars replaced stools with swings, a fun idea that you know could never work Stateside. (The lack of litigiousness outside the United States is refreshing.)

It feels as though English could be a second language throughout this region. Thanks to the longstanding tourism industry, everyone in the Riviera Maya seems to speak it, from the busboy to the gas station clerk—and they speak it well. I speak Spanish, but whenever I try to here, I almost invariably get a response in English.

And Playa is surprisingly affordable. There’s enough competition among the hundreds of business owners here that prices have stayed low despite the increased exposure and tourism. When speaking with locals, everyone invariably told me that La Quinta is for everyone—visitors and locals alike. It’s not a tourist trap ripping people off with tacky experiences at exorbitant costs. It’s truly the heart of the city’s entertainment.

This section of the Riviera Maya could fool you into thinking it’s somewhere in Florida. The infrastructure is just as good as that of the United States, stores are nearly identical to those back home, everyone speaks English, and there’s a Parrothead atmosphere that dominates Playa. Just 20 minutes south of Playa, Tulum feels a world away. Tranquil, less populated (at about 18,000 people), and boasting some incredible ancient sites and natural attractions, the focus in Tulum is more on preservation than on development.

Nevertheless, the path of progress rolls down the coast, just a bit more conscientiously in Tulum. Here, much land is ejido and therefore protected against ownership or development. The few large-scale developments that are underway are completely self-sustainable and designed with co-existence in mind. In fact, all of Tulum is technically “off-grid”… it has no choice. There is little community infrastructure, each individual land or building owner providing their own energy and waste systems.

Walking along the beach at this end of the Riviera Maya, you won’t see nearly as many people as on the beaches at Playa. And in most parts, those that swim or sunbathe here are more likely to live nearby than be visiting. You’re more likely to see an ancient Mayan ruin and some impressive wildlife than big parties of tourists.

Tourists that come to Tulum generally call themselves eco-tourists. They aren’t there for the bottomless margaritas or banana boat tours, they’re there with backpacks and guidebooks, wanting to hike the ruins, camp on the beach, and trek the jungle.

As I said, the two towns may be close in proximity, but they couldn’t be farther from one another in culture. No matter which town you decide is more your speed, the lifestyle is enviable… the food is high-quality and affordable, the people are warm and welcoming, the cost of living is inexpensive… and it’s all right on the beach.

And because Mexico is so culturally similar to the United States, for those who don’t want to plunge into a sea of alien culture, the Riviera Maya makes for a lovely wading pool.