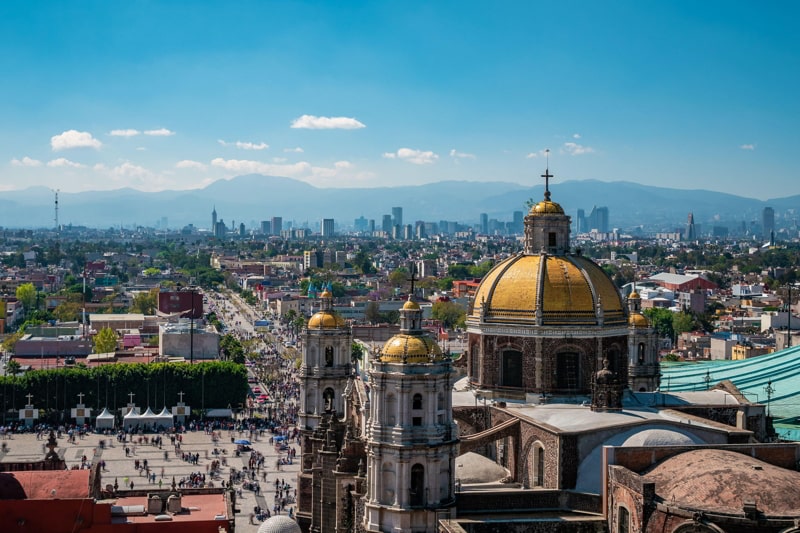 Because so much of the draw of Mexico for foreigners is surf and sand, you don’t hear as much about interior parts of the country. But there is so much more to Mexico than just the coastline…

Our correspondent, Patrick Little, spent some time getting to know Mexico City and reported back…

A mythical and modern metropolis founded by an advanced indigenous people, Mexico City is a mesmerizing hub of human civilization. It’s a world capital of culture and anthropology with a rich and fascinating history, an abundance of breathtaking architecture, and astounding gastronomy…

Spanish surrealist Salvador Dalí paid the city one of its most memorable, if unconventional, compliments—as only Dalí could. He visited Mexico City just one time, in 1938, swearing to never return. He said he couldn’t stand to be in a place more surreal than his paintings. Much has changed since Dalí’s visit, but the surrealism has perhaps intensified.

At once sophisticated and sprawling, otherworldly and familiar, cosmopolitan and provincial, it’s a city of delicious contradictions. Long overlooked—and at times, even discouraged—as a travel or retirement spot, Mexico City has become the destination du jour in recent years. Few places on Earth can boast such an eclectic panorama of lifestyle, activities, landscape, and cuisine—fewer still can make these claims and match Mexico City’s year-round temperate climate.

Breaking The Rules Of “Big City”

And yet, Mexico City is without the coldness that seems requisite in a city of its size and significance. After all, this is still Latin America; ignore all of the beautiful parks and plazas and theaters and markets and delicious street food at every corner, and you’re left with the warmth and welcoming nature of Mexicans—an endearing trait that seems to unify all Spanish-speaking cultures.

There are a number of reasons Mexico City appeals to the would-be expat, and the estimated 700,000 Americans who already live in the city are a testament to that. Why did they all move here? A friend of mine from here who recently moved back after living in Spain for several years put it simply: “Se puede vivir como un rico sin serlo,” he said. You can live like a rich man without being one…

A City Of Towns

From the very beginning of its storied history, even when the Aztec Empire still reigned, Mexico City has had the tendency to absorb and incorporate surrounding towns and cities in the Valley of Mexico. It’s what makes the city so hard to wrap one’s head around, even for those who have lived here their whole lives.

From the historic center, now known as Zócalo (the site of Tenochtitlán that the Mexicas believed to be the center of the universe), Mexico City sprawls in every direction in 16 delegaciones, or boroughs. Each borough has the feel of its own city, each comprised of its own diverse neighborhoods, referred to as colonias, of which there are more than 300 in Mexico City, and distinctive landmarks.

English is relatively widely spoken throughout Mexico City. I’ve been impressed and delighted by the English I’ve heard from the people I’d least expect to know it. I would go so far as to say that it’s possible to have a great experience living here without ever speaking Spanish… That said, far from everyone speaks English. For the absolute best possible experience living here, you should acquire at least some basic Spanish vocabulary.

An Uber driver told me that he has friends that live off of 30 pesos (US$1.50)  a week in Mexico City… This is the most extreme example I’ve encountered of how the cost of living in Mexico City varies greatly depending on where you live and spend your time.

A fancy house in Polanco, for example, could cost up to 40,000 pesos (US$1,980) per month. Then again, I have a friend living in Roma—a very desirable neighborhood—who pays roughly 6,000 pesos (US$300) for a room in a nice apartment, centrally located. Considering how nice of a place it is, it’s not hard to imagine just how low the prices go the farther you move from the most livable parts of the city.

But even if you live somewhere where the rents or mortgages are highest, Polanco or La Condesa, for example, expect your bills to be significantly lower than what you’re used to back home—perhaps with the exception of cable and internet.

Friends of mine, a couple who moved from Richmond, Virginia, have expressed the affordability of having a maid who comes to the house to cook and clean as being among the biggest surprises in Mexico City. They said this is something they wouldn’t dream of having back in the States, and yet the price—about 400 pesos (US$200) for services provided twice per week—and convenience afforded by the maid’s services makes it almost a no-brainer.

Eating out—even at the most expensive places—will seem remarkably cheap compared with a restaurant in the States. What’s incredible is that you don’t have to go to the fanciest places to eat well in Mexico City. My most expensive meal—which included several dishes, a couple of beers, a glass of mezcal for good health, and dessert came out to about US$45. And that was by far the most I’ve paid for a meal…

Is Mexico City For You?

Up until recently, Mexico City was infamous for its pollution and poor air quality. But thanks to innovative measures to combat it, the problem has been steadily declining for the past 15 years. Ultimately, the most common complaint I hear from people living in Mexico City is the traffic. If you’re driving or taking a cab somewhere, sometimes it can take up to an hour longer than expected to get from one place to another. People in Mexico City are not generally known for their punctuality…

Given its size, diversity of landscape, and varying neighborhoods, Mexico City is a place where a range of people could thrive. Very different types of people have told me—for a wide-range of reasons—that they can’t imagine living anywhere else ever again.

And it’s a city where you can truly have it all without being prohibitively wealthy.

Places like Tlalpan and Coyoacán, among other areas, offer a quiet existence… but, in the end, if you don’t plan on spending all of your time in those places alone, it’s inevitable that you’ll encounter urban chaos at some point.

If you never—never, ever—want to experience that, I’d advise looking to move somewhere other than Mexico City.

Then again, come see this place for yourself before you rule it out… You’ll probably be surprised by what you find.

For more details on all your top options in Mexico, don’t miss this year’s Live and Invest in Mexico Virtual Conference, March 17–19.

Over these three days, you’ll hear from our full team of Mexico experts on everything you need to consider to make your move here… from how to establish residency… to where to find the best health care (and your options for health insurance)… to current real estate opportunities… and lots more.

And, our team of seasoned expats will take you on a tour of their own versions of paradise—the places they have chosen to call home, full or part time.

As I mentioned last week, the first 50 readers to register save US$200 off with our Early Bird Discount. And, as a LIOS Confidential reader, you save an extra US$50—simply quote your exclusive Coupon Code MEXICO50 to avail of your discount.