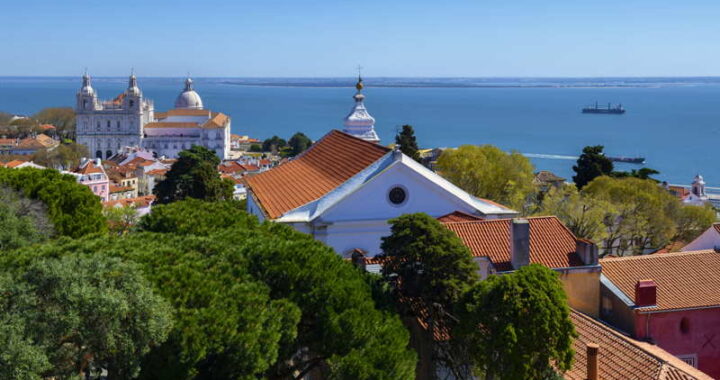 Paris Versus Lisbon—It’s A Tough Choice…

European borders opened recently, allowing me to do a little more than dream of getting out of France for a bit. Ireland is likely to be our first trip out of the country. It’s an easy enough prospect considering the short flight and the fact that my parents will already be there to help out with childcare on our first getaway as a family of three.

Portugal is high on my list. As I was mulling over destinations in the country, I thought back to Lisbon and couldn’t help comparing it to Paris—my newly-adopted home.

Both are Western European riverfront capitals with lots of history, culture, and entertainment. They have many things in common, but they really couldn’t be more different…

Lisbon lies on the River Tagus where it opens wide to flow into the Atlantic. However, when you’re in the city it feels more like you’re on the ocean than it feels like a riverfront city. And, after all, the sea is just next door. From some waterfront points, you can’t see land on the other side of the estuary, and the water is gray and choppy just like the Atlantic. A strong ocean breeze is a common companion here.

Paris, perhaps a more conventional riverfront city, lies inland, with the River Seine more or less bisecting it. Far from the wild feeling of Lisbon’s coast, the Seine is a gentle, placid river offering miles of civilized stone banks to enjoy it from. In Lisbon, you’ll see sand at some parts of the waterfront where the stone construction peters out into the water, but not in Paris.

These differences in the cities’ respective bodies of water seem reflected in their populations and attitudes, too…

Paris is a staid, predictable, highly genteel city. Parisians are likewise subdued for the most part, whereas Alfacinhas (people from Lisbon) can be more of a raucous bunch by comparison. They are a little more unpredictable and with a Latin flair for revelry that shows in their love of music and dancing. Live music is a much-appreciated form of entertainment in Lisbon’s nightlife, but it’s not all that common in Paris. However the music is played, you won’t catch Parisians standing up at an outdoor café to sway. There’s a spontaneity in Lisbon and its people that you don’t feel in Paris.

There’s also a laid-back feeling in Lisbon that, for me, comes from the wide-open harbor that has you feeling like you’re in a beach town… albeit a sophisticated beach town. The vibe is easygoing…

That said, the French live to enjoy life, they appreciate pleasure, and don’t like to rush. Pass the banks of the Seine or the Canal Saint-Martin or stroll through a park on even an overcast day, and you’ll see plenty of Parisians laying back and relishing the day.

Both cities boast incomparable museums, galleries, concerts, and theater. Both have thousands of years of history to draw on. Both serve up world-class cuisine. Both have gorgeous architecture that could have you tripping over yourself as you look ever skyward.

But when it comes to enjoying all these amenities, Lisbon is by far the cheaper of the two options. Although Paris can be more affordable than most believe, it’s still an objectively expensive city to live in. Eating out is our family’s biggest splurge, and it bites quite a chunk into our monthly budget. Eating out in Lisbon, though, is super affordable, and the food is always fresh and delicious. Because of the proximity to the ocean, seafood is a real specialty in Lisbon, which isn’t the case in Paris.

Paris is the more walkable of the two cities. You could walk across its mostly flat topography easily in a matter of hours. Lisbon isn’t quite as manageable size-wise and challenges the pedestrian with hills and steps. But both cities have excellent public transport systems, so you don’t need to walk much in either if you don’t want to.

Both cities have impressive populations of English-speaking expats. Lisbon is home to mostly Brits… while Brits, Canadians, Americans, Australians, Irish, and many more English-speakers besides live in Paris. As I’ve become more active in the expat community in Paris over the last year, I’ve met several of each of the nationalities above, but it seems to me that we all meld together as foreigners, with little attention paid to point of origin.

Practically speaking, France and Portugal are distinct, as well… France is the land of bureaucracy, whereas Portugal takes a less strict stance on administration, making pretty much anything you need to do easier than France does.

Portugal offers several attractive, turn-key options for residency and citizenship, and even offers the incomparable NHR (Non-Habitual Resident) program once you’ve acquired residency. If you haven’t been resident in Portugal in the last five years, you can apply to live there tax-free for 10 years under the NHR. France also offers several routes to residency, but requires more of the applicant in terms of paperwork and physical presence in the country.

The health care in both countries, though, is excellent. France’s is ranked as the best in the world according to WHO, and Portugal comes in 12th on the same list (the United States is in 37th place). As a resident of either country, the care comes just about free of charge. Even if you’re not part of the social system, paying out of pocket is affordable—leagues cheaper than care in the States.

Obviously I’m prejudiced—I chose to live in Paris because I love it, so there’s little point in me trying to rank one over the other… They each offer unique and distinct lifestyles and Lisbon’s just doesn’t speak to me the way Paris’ does.