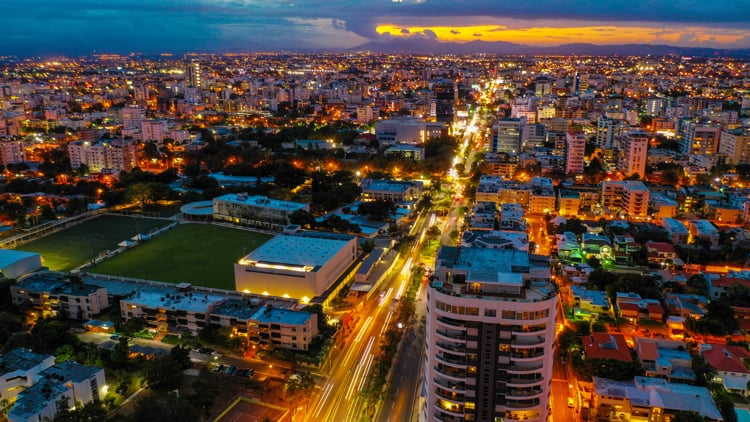 Soaking Up History And Sun In Santo Domingo

Santo Domingo, the oldest city in the Americas, has over 500 years of history to offer along with its warm, plentiful sunshine and more than 1,000 miles of azure, Caribbean coastline…

In an intriguing marriage of Old World history and European culture with Latin friendliness and flair, the capital of the Dominican Republic is one of the world’s most alluring of oxymorons…

Elegant and noble Spanish-colonial architecture soars up to tower robustly over the narrow cobbled streets of the Colonial Zone, shading old men taking dozing siestas on street benches… as women gossip while prepping dinner in the street, shouting to one another from their doorways… as domino players draw vocal crowds for exciting matches… and as kids joke and play as they walk home from school. Lounge music from upscale restaurant patios gives way to bump-bumping bass of merengue and bachata from colmados (corner shops) and homes.

At once cosmopolitan and rustic… a city both for business and for fun… a skyline of new glass high-rises and centuries-old stone cathedrals… this city lives as equally in the past as in the present, with a rhythm to life that’s as vibrant as it is seductive… as energetic as it is languorous…

And for all this ambience and personality, Santo Domingo is still a modern, metropolitan city…

When you think of relocating to a Caribbean island, you likely think of lazy lapping waves on sugar-white sands… palm trees, hammocks, dirt roads… the charmingly small collection of local fruits and the simple meals of barbecued fish and chicken you enjoy on holiday. While the Dominican Republic has all these things… they aren’t typically enough to keep a person occupied and content for much longer than a two-week vacation.

What you don’t typically think of are the realities of day-to-day life: driving on dirt roads every day, wanting high-speed internet when you need a break from the sun, and purchasing more than the basics (and maybe a few familiar comfort foods) when you head to the grocery store or mall.

To actually live on a Caribbean island is a different thing from the vacations you’ll inevitably compare it to—those compromises you make while visiting can easily become frustrations in your new life.

The Dominican Republic Is Not Like Other Caribbean Islands, And You’ll Quickly Adapt To Life Here

But that’s not the case in the Dominican Republic—and certainly not for those relocating to the capital. No (OK… few) compromises are needed to live here. Enjoy the ease and speed of well-paved roads that crisscross the country… avail of the convenience and familiarity of modern and wide-ranging shopping options both for food and otherwise… all the while still within a stone’s throw of that quintessential Caribbean vacation lifestyle.

Aside from the infrastructure the island has to make your new life so easy to adapt to, this is one of the friendliest, most open cultures I’ve ever experienced. Dominicans are an exceedingly happy, social group of people.

These two pillars support a turn-key move and easy integration for folks thinking about settling in the DR.

Without much personal effort, you’ll become instantly pulled into the network of whatever corner of the island you choose to settle on. When you leave your house, you’ll be greeted by the folks on your street, from the veggie and coconut vendors to the security guards (present outside most businesses, apartment buildings, and gated communities). Stop by your local mini-mart, the cashier will recognize you after just a couple trips. Living among neighbors, they’re sure to stop you for conversation whenever they see you come and go.

Within a couple weeks of moving in, you’re sure to be invited over for more barbecues than you can commit to. Even if just visiting a town, if you strike up a conversation with someone, they’re likely to invite you into their home and start preparing some chickens for a soup or grill before you even realize what’s going on.

Dominicans are unfailingly hospitable… and, like your favorite grandmother, they live to spoil. They want to offer the best and the best impression they possibly can, no matter who you are.

Walking around Santo Domingo, you’ll be greeted with a friendly smile and wave by every traffic guard, business owner, and dozing security guard you pass. Given half a chance, they’ll draw you into a conversation, eager to introduce you to their country and make sure you’re having a good experience. When I mentioned it to a crossing guard who helped me across the busy Avenida George Washington one afternoon, he was glad to hear I was there to write up Santo Domingo, “That’s great—we need that! We love foreigners, they boost the economy and everyone benefits. Please, bring as many newcomers as you can!”

In fact, though, the DR has been so long visited by foreigners that over so many generations of intermarrying, Dominicans don’t feel such a divide between themselves and foreigners… there’s a unique lack of any “us versus them” bias.

On a related note, this is a great destination for single ladies… I’ve spoken with many formerly single expat ladies who found love in the DR, one boasting proudly of her “super hunky” husband of nearly 10 years now.

Today, Santo Domingo, capital of the country with the fastest-growing economy in Latin America, is chasing a new prosperity. The streets are lively, the harbor busy.

From real estate to the general cost of living, it can be hard to believe you’re in the Caribbean when here. Prices across the board are more Latin American. You could live well in the DR on your monthly Social Security check alone.

And recently upgraded airports mean you can get to the Dominican Republic from the U.S. East Coast in two hours.

Most of the world knows the Dominican Republic for its white-sand beaches. The expanding tourist traffic to this island nation’s many coastal resorts is a key driver of the economic growth the country is enjoying.

And I appreciate a beautiful beach as much as the next chica… But, for many, the real appeal of the Dominican Republic is Santo Domingo, the oldest European city in the Americas.