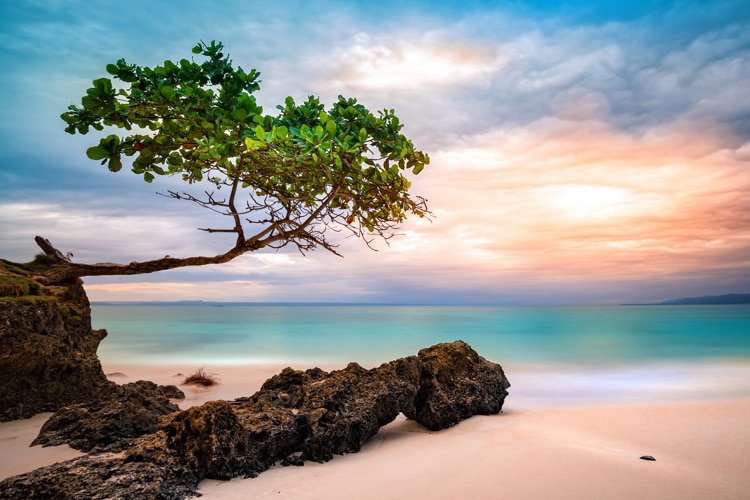 So Many Beaches, And So Much Island Time…

If your heart is set on the Caribbean but thought you couldn’t afford it, I have good news… The Dominican Republic has everything you want at a price you can’t say no to.White-sand beaches, swaying palm trees, warm turquoise water, year-round sunshine—you’ll find them in abundance here in the Dominican Republic…In fact, you’re almost spoiled for choice—this small nation boasts about 800 miles of coastline, all of it sandy and welcoming. So how to choose which beach is for you?

Las Terrenas has long been our favorite beach town on this island nation, unique in its European population and non-Caribbean flair. Scratch the surface of this corner of the DR, and you find one of the most interesting expat communities you’ll encounter anywhere in the world. Americans are in the minority; this is a majority French expat population, bolstered by Italians, Brits, Danes, and Germans. On any of the many white-sand beaches of Las Terrenas, you can catch a pétanque match almost any evening at dusk. Retired Frenchmen pitch (is that what you do in pétanque?) for a couple of hours before the light leaves them entirely in the dark, on the sand, with the Caribbean lapping behind them and the bar open for business. They transition seamlessly from pétanque to white wine.But Las Terrenas isn’t a typical beachy kind of destination… the food here is more European than it is Caribbean, and the vibe you get just isn’t  Dominican… I love Las Terrenas, but it doesn’t necessarily represent the average kind of beach town on the island

If you’re looking for a more expected type of resort beach lifestyle, the DR’s northern coast might be the fit for you. While the southeastern coast is all but devoted to tourism—making it hard to feel comfortable as a resident, not to mention the higher prices—the north coast is a bit less trafficked on the whole, making it easy to take what you want of the tourism amenities and escape them when you want to. Plus, the northern coast is often said to be the most naturally stunning part of the island, also known as the Costa Dorada (Golden Coast), with lushly forested mountains rising behind the endless white-sand beaches.

San Felipe de Puerto Plata is the capital of the Puerto Plata province and the ninth-biggest city in the country. The first landing place in the New World for Christopher Columbus and his crew in 1492, he could be called the island’s first tourist, and this country was Spain’s first colony in the Americas. His three famous ships landed on this coast, specifically, though, making it the first foothold for Europeans on this hemisphere (then known as La Isabela, the name he gave it). The European township dates to 1502, making it one of the oldest settlements on the island. The city was an important trading port for decades after, its ingress protected by a natural harbor that made it a popular landing spot. The port was designed by the Columbus brothers, Christopher and Bartolomeo, in 1496, making it the oldest port in the Americas. But as the island became more developed, meaning more ports of call and other economic centers, the town fell into ruin and was taken over by pirates, claiming it as their smuggling hub by the 1560s. In 1605, orders were given to abandon it entirely in the hopes of hindering piracy. Legitimate or not, though, the town has nearly always had a steady economy, if not wealth—up until 1863, at least, when the city was felled in the Dominican Restoration War. The silver lining of this devastation, though, was the following renaissance for the town. Rebuilt from 1865 onwards, much of the town’s architecture is now Victorian. In fact, it’s here that you’ll arguably find the best and largest collection of 19th-century, Victorian-style homes in the entire Caribbean. By the turn of the century, the town was a powerhouse of cultural, social, maritime, and economic development. Sustained almost entirely by trade over the years (with some contributions from agriculture), it was a boon for the area to add tourism to its GDP sources beginning in the 1980s, and the income from foreigners coming to visit or stay has only increased over the decades. This coast is now a large contributor to the country’s overall tourism income.

Today, Puerto Plata is a nice compromise between a touristed beach town and one that has a permanent population of both locals and foreigners…

While there’s no denying this is a resort town (and the cruise ship port is just 20 minutes away), the real tourist hot spot is next door in Sosúa, 30 minutes to the east—sometimes called the Las Vegas of the Dominican Republic. Sosúa doesn’t appeal to many expats these days, but it was here that the first true expat community congregated on the island when Jewish settlers found their way here after the forced diaspora of WWII.

In Puerto Plata, though, you’re just as close to a national park as you are to all-inclusives—solitary jungle hikes and bird-watching are just as accessible as zip-line tours and dolphin excursions. You could choose to drive east to the more trafficked parts of the coast, or head west where few foreigners venture. There are gated communities catering to expats, but foreigners have also settled in local barrios, relishing the more authentic atmosphere that’s still accessible here. Plus, the active foreign market means this is a great place to consider starting a business catering to tourists or expats. With a population of about 119,000 people, this is the largest and most commercial town on the northern coast. Despite being near the thick of things tourism-wise, you still have access to a local lifestyle. Buy your seafood from the fishermen coming to shore at dawn each day, shop the markets for fresh produce, all freshly grown and picked to be delivered immediately to market. The nearby mountains produce a wealth of citrus and tropical fruits, lettuces, vegetables, and herbs. As long as you steer clear of imported goods, the cost of groceries here is negligible. If what you want is pure and simple—but above all affordable—beach living, with a wealth of modern amenities, but a more rustic lifestyle equally within reach, then Puerto Plata may be your Shangri-la. Interested in learning more about the Dominican Republic and all its many beaches you could choose from? Join us virtually for our upcoming Access The Dominican Republic Online Workshop.This is the only event of its kind to help you consider, compare, and contrast the Dominican Republic’s best places to live as a foreigner…  One that allows you to discover the Dominican Republic—and meet everyone you should know here—without the costs and hassle of travel…We’ve condensed everything into just a single, action-packed day that you can enjoy from the comfort of your home or office.We’re going to help you develop an actionable plan so you can follow through on your move in as little as 12 months or sooner. Most important, we’ll introduce you to our trusted contacts who can support you through every step of your journey…. both during and after the event. Video and full details of the event we have planned for you are here.Kat Kalashian Editor, LIOS Confidential