The Colombian Caribbean’s Best Buys Are In Santa Marta 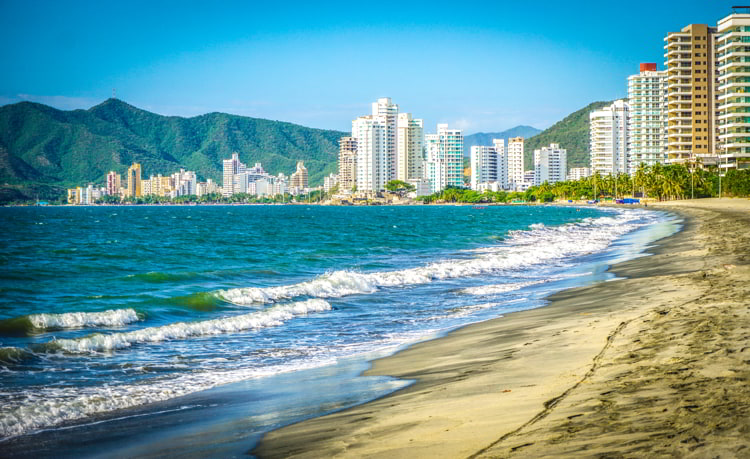 The Colombian Caribbean’s Best Buys Are In Santa Marta

Last week in Panama I went paddle boarding with Carlos, our Colombian property manager at Los Islotes, and we naturally got around to comparing his home country to his chosen adopted country…

It’s an odd comparison, though, because Panama and Colombia don’t have a ton in common… the geography, climate, culture, food… they’re all very distinct for each country.

He’s from Medellín, which is also where I spend the majority of my time when in Colombia. And although a wonderful, cosmopolitan city with a lot to offer, Medellín is landlocked. Its river provides some water diversion for residents, but there’s nothing like living on the coast, seeing endless ocean from your home every day.

We talk a lot about Medellín here at Live And Invest Overseas—with good reason—but there’s so much more to Colombia than this one city, including two gorgeous coastlines to take advantage of, one on the Pacific and one on the Caribbean.

While there’s not much going on on the Pacific coast, the Caribbean coast is more developed, with several enviable cities to choose from, including the colonial Cartagena, the traditional, muy auténtico Barranquilla, and the lesser-known, more affordable Santa Marta.

Everyone who appreciates the Caribbean has heard of Cartagena. This Spanish-colonial city on the Caribbean Sea is Colombia’s #1 draw for foreign visitors and home to a sizeable expat community. But just 150 miles up the Caribbean coast is another Caribbean town that you may not have heard of…

While Cartagena is where the world comes to visit… Santa Marta is a place to settle in.

And thanks to the continued strength of the U.S. dollar versus the Colombian peso, dollar holders enjoy a serious buying advantage right now.

Columbus visited Santa Marta on his second voyage to the New World in 1499. The oldest city in Colombia, Santa Marta was officially founded in 1525.

It was here that one of Columbus’ crewmen documented the wealth and riches of the local indigenous people, giving rise to the myth of El Dorado, the fabled city of gold.

Today, remnants of Santa Marta’s historical past can still be seen and enjoyed. The city is working hard to refurbish and preserve historical buildings as well as add new development…

Latin America Correspondent Lee Harrison has spent significant time in Santa Marta. He says, “When I first visited Santa Marta in 2010, it was definitely a work in progress. The formerly seedy downtown was undergoing restoration, bringing the old colonial homes, parks, and churches back to their original splendor. Leading-edge investors were prowling the city.”

Today’s Santa Marta is a different story. The downtown now has an attractive seafront park, plenty of small cafés and bars, as well as coffee shops, boutique hotels, excellent seafood restaurants, and even a cruise-ship port. There’s a 256-slip marina, and new, tasteful condo projects have sprouted up around the entire area.

When we refer to “Santa Marta,” we’re talking about the Santa Marta metro area, which extends 13 miles from Taganga in the north to the airport in the south. This stretch of Caribbean coast is home to an amazing diversity of beachside destinations.

Let’s take a look at them from north to south, starting with Taganga…

Taganga is a small village surrounded by tall mountains that sits on an expansive, sparkling, deep-blue bay. The beach is long and unspoiled and is bordered by a new boardwalk. Taganga’s bay is terrific for diving and snorkeling, and you’ll find a number of dive shops and excursions available.

Santa Marta (the city itself) contains the original historic center and the cruise-ship port. This is the part that underwent the dramatic restoration. Santa Marta also hosts a number of inland neighborhoods, such as Bavaria, that would be great for full-time living away from the tourist traffic.

El Rodadero lies about 10 minutes south of Santa Marta. It’s been the main draw in the area for years, as people sought to avoid the once-seedy historic center. The beaches are far longer, wider, and better-kept than Santa Marta’s, creating a giant, crescent-shaped shoreline that’s several miles long. Rodadero offers a small-town feel that you don’t find in the city.

On the oceanfront, Rodadero boasts a fine, sandy beach lined with palm trees along the warm, calm waters. The palm-shaded boardwalk is filled with people walking and patronizing the kiosks, which sell everything from fresh-made pizza to fresh-squeezed fruit juice.

Weekend nights turn into an impromptu beach party, with families turning out by the hundreds to enjoy (and dance to) the local music of wandering music groups.

We think of El Rodadero as the family destination within the Santa Marta area. It’s bustling with people enjoying the beach, markets, shops, and boardwalk. It maintains a safe, friendly, and laid-back feel…

The southern sector consists of neighborhoods Rodadero Sur, Playa Salguero, Pozos Colorados, and Bello Horizonte. It lies south of Santa Marta and El Rodadero, but before the airport. These areas feature quiet, well-tended, and more exclusive beaches than you’ll see in Santa Marta or El Rodadero. They’re also the site of quite a few new, upscale condo buildings.

This southern sector is the current direction of expansion in the Santa Marta market, where you’ll find most of the new construction and pre-construction deals. The condo projects here are generally high-end, of large size, with nice finishings and amenities. The southern sector is long on natural beauty. Bello Horizonte has the widest beach in the area, and most of the beaches along this stretch are frequented only by the neighboring residents, with little to no tourism. It’s peaceful.

Lee says, “When I came here as a foreign traveler, I found the southern sector a bit dull compared to the party atmosphere in El Rodadero or even Santa Marta Centro. But now I understand its attraction for those who want to escape the bustle of Medellín or Bogotá (or El Rodadero, for that matter).”

All things considered, Santa Marta is our favorite spot on the Colombian Caribbean coast. It doesn’t have Cartagena’s impressive colonial architecture, but neither does it have Cartagena’s prices or tourism annoyances.

From the pristine bay at Taganga to the classic port ambience of Santa Marta and from the energy of El Rodadero to the gleaming towers of the southern sector, Santa Marta has something for everyone.

If you’re looking for a colonial Caribbean city with less bustle and more bargains than the famous Cartagena… then Santa Marta could be right for you.