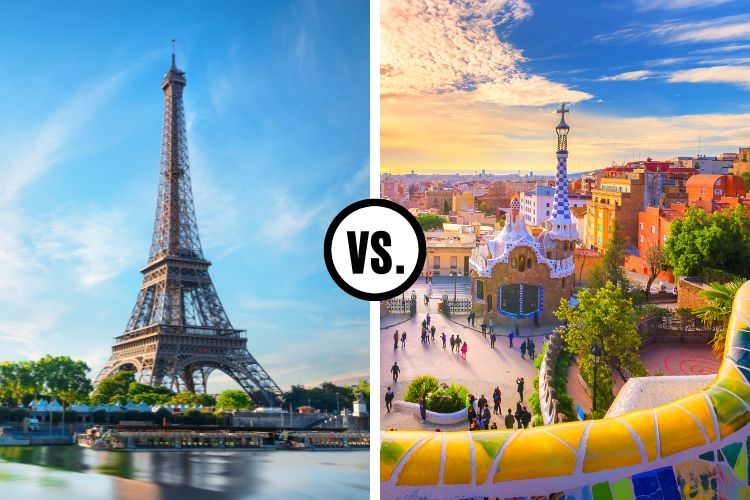 This time next week, I’ll be off to Barcelona for the first time in nearly 10 years…

My husband and I toured Spain together in 2007, long before we were married, and Barcelona was the highlight for me (I can’t wait to see how much progress has been made on La Sagrada Familia in the meantime!)

Regular readers will know that I’m a city girl… I like the occasional trip to the countryside, beach, village, mountains, etc., but I don’t think I could be happy long-term anywhere but a metropolis.

I’ve often said that I’d like to live in Barcelona… she checks every box for me.

Because while I’d be comfortable in many cities around the world, it’s the ones that are steeped in history that really captivate me. Paris, where I’m based, is another of these, as are many of Europe’s cities. Perhaps it’s why I generally prefer Europe to other continents…

A son of Barcelona, novelist Carlos Ruiz Zafón, described his home as, “a very old city in which you can feel the weight of history; it is haunted by history. You cannot walk around it without perceiving it.”

It’s not just the history of the streets, though, it’s something deeper. These are the places that inspire and attract great artists, writers, architects, and leaders… and that inspires me.

What people cite most about Barcelona is its energy, and I think this is what I also pick up on in all the cities I love… the energy of a place that captures me just as it did all those great minds over the centuries.

Following this train of thought led me to compare Paris and Barcelona, item by item…

As I’ve said, both are old cities. Each offers a gorgeous medieval historical center and boasts gothic masterpieces. Both cities also underwent large-scale modernization, Paris during the Haussmann period from 1850 to 1870 and Barcelona not long after when Antoni Gaudí made his colorful mark on the city. Each city rejected these well-intentioned pioneers during their times but have since become renowned for their works.

Art and music thrive in each, both historically and today. These powerhouse cultures have produced and attracted countless authors, painters, philosophers, and revolutionary thinkers. They each continue to nurture artistic education and cultivate the arts for their residents.

Want to see an opera next Monday? The ballet on Tuesday? The symphony on Wednesday and a fashion show on Thursday? Dinner at one of the world’s top 10 restaurants on Friday night? A cooking class on Saturday and a lazy day sunbathing in the park on Sunday? Either city can satisfy the most ambitious of schedules.

As for museums and galleries… they abound in both cities. As do the nightlife options.

Paris and Barcelona are similar in size and also in the breakdown of the city. Each is comprised of distinct neighborhoods with their own feel. In Paris, walking from one arrondisement to another can feel like going from one city to another, and Barcelona is much the same with its Gothic Quarter, Eixample, Barceloneta, and many other unique neighborhoods. Both cities are very walkable and offer metro, bus, and bikes to get around, and Barcelona also has a couple tram lines.

What about the great outdoors beyond the sidewalks? Each offers more green space than you’d imagine for cities so compact. Barcelona’s Parc Güell would have beaten any of Paris’ parks hands down 10 years ago… unfortunately, it was privatized in 2013 and you now have to buy tickets (for a staggering 10 euros) to visit this fantastical Eden. I’m sure this is a positive move for the wellbeing of the park, which was seeing too many visitors in a day, but for residents of the city, I can’t help thinking this was a major loss.

Paris boasts a staggering amount of—free to access—green spaces. With two woods at edges of the city, plus several large parks, and countless small green corners, you’ll never go far without grass or trees in Paris.

Within an hour of either city, you could be hiking in the depth of the woods, and near Barcelona you also have the Montserrat mountains to climb or ski.

Where the cities really differ is in three places: the cost of living, the personality of the population and, therefore, the city overall, and the geography.

Barcelona is much cheaper than Paris—by up to 45% according to some sources. Food and rent are notably more affordable in Barcelona. Whether you’re eating out or buying groceries, you’ll generally save money in Spain, no matter where you are in the country. Utilities cost about the same in each place, as does gas…

Which brings me to the geographical difference: Barcelona is a lot more temperate than Paris, which gets a full four seasons. In Paris you’d be unlikely to have air conditioning to add to your bills in summer, simply because it doesn’t exist in most apartments. In Barcelona, you’re more likely to have climate control available, and if you have it, you’re likely to use it in summer.  On the other hand, you’d need more heating in Paris throughout the winter than you’d need in Barcelona, where it doesn’t usually get as cold…

Personally, I love seasonal change, especially after living without it for seven years in Panama, so I love Paris’ climate. While Barcelona does get a hot summer, its winter rarely gets below 50°F, and that’s not enough for me.

The final difference is the hardest to describe, but perhaps the most obvious once you’ve experienced both: their personalities.

Barcelona and its people are open, eccentric, welcoming, warm, lively… a little rambunctious.

You could almost say that Paris and Parisians are the opposite. I don’t mean it as an insult—I’ve chosen Paris as my home because I love it and its personality more than any other city I’ve yet experienced. But there’s no denying (and it’s a cliché for a reason) that Parisians are standoffish and can come off as cold. The city is traditional and staid.

Ah, and a bonus difference… one that means so little to me I nearly forgot it, but which may be the entire reason some people would visit or move to Barcelona: the beach! Barcelona is the only true waterfront metropolis in Europe, and this claim to fame is enough to attract millions of tourists a year. Locals run on the beach in the morning, surf, swim and fish on the weekend, and enjoy romantic walks in the evening… you don’t get that in Paris.