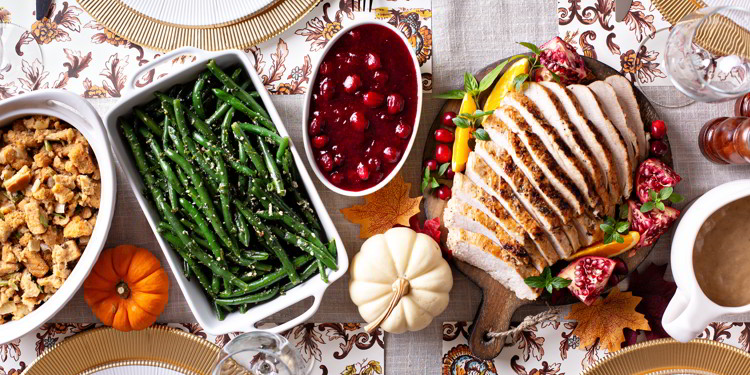 I would argue that most things in life are better with a twist… something unusual… unexpected… unfamiliar… makes anything more interesting. For me, that’s about 90% of the allure of living overseas—nothing is ever as you expect it to be.

And this has been the case with Thanksgivings throughout my life, for example.

Most of the time my parents, my brother, and I were all together on the day, but it was never a family affair. We always invited our new local friends and colleagues to eat with us, so, for me, Thanksgiving became more about a big party to bring together lots of disparate people, all with their own backgrounds and cultures to bring to the table, than it was about the traditional extended-family dinner.

Thanksgiving overseas is like a cultural exchange, for me having nothing to do with history or Americanism… it’s become a way to get to know my new home and new friends from all over the world through a big homestyle meal.

In Ireland, my mother invited all of the small business’ new employees to celebrate with us. Back in those days, you couldn’t just buy a raw turkey to cook, you had to go to the farm, pick one out of the flock, pluck it and dress it before you could take it home. My mother did this to provide us with a bird once… luckily, the next year there were alternatives.

Getting the turkey was only half the battle, though. The term “American kitchen” has become a shlock real estate listing phrase for a reason—no other country in the world does kitchens like Americans. All the better to cook our giant meals! Overseas, this is never quite so straightforward.

In Ireland, we had a Stanley cooker… not any kind of conventional oven. It had a tiny door that covered a tiny opening in which to put your food. My memory must be inaccurate, but, as I recall it, the thing could barely fit half a cookie sheet. I don’t know how she did it, but my mother did manage to cook us turkeys in it… to varying degrees of success…

One year the turkey popped out of the oven and slid across the floor like it was on a Slip ‘N Slide. Another year, when we had two turkeys in fear of one being too small, the backup was forgotten in the oven overnight and dried to a crisp. Those were a couple of our most memorable childhood holidays.

In Paris, my brother and I would invite friends over, as would my parents, and we’d all help to cook in the tiny space we had to work in. The oven wasn’t the problem in Paris—it was where to put all the dishes of food once they were cooked. We’d shuttle heaped bowls, plates, and baskets out of the kitchen and find some crazy place to put them until we had room in the kitchen or on the table again. More than once the biscuits were found in some forgotten nook the next day.

In Panama, the event got even bigger, and became more of a party. No way to host a sit-down dinner for 30 people, so it was a buffet with lots of booze.

Here in Paris this year, I’ve just finished cleaning up the second Thanksgiving I’ve ever hosted, and I am proud to say I’ve earned my overseas holiday stripes—I have my own disastrous turkey story to tell!

I ordered my cooked turkey for pickup. When asked what time I wanted to pick it up, I said 1 p.m. They neglected to tell me that they also happen to close for lunch at 1 p.m…. When my husband turned up at 1:15 to locked doors, we scrambled. The butcher wouldn’t open again until 4 p.m., because, though we may be in central Paris and it’s an ordinary weekday, most butchers in the city take a siesta lunch and close for 3 hours every day they open. Welcome to France…

On the other hand, we overordered the seafood (a particular Thanksgiving family tradition of ours). So while we had no bird, we did have over 15 pounds of mussels…

We picked up some roasted chickens—luckily prevalent here, so an easy fix. We went ahead with dinner as planned… and then, after dinner, stuffed to bursting and sick of poultry, we had to go pick up our 11-pound turkey…

After I do a soup, I’ll still have more turkey on my hands than I can think of what to do with (please send leftover turkey recipes if you have favorites, I need the help!).

And apparently some Paris Thanksgiving flubs never change… I found a cake hidden on top of the cabinets the next morning—at least I found it before too much time went by!

After cooking up nearly half the mussels, we had to call it quits. Luckily, a couple of guests were happy to take home the bounty.

This year’s guests, I’ll add, were a wonderfully eclectic bunch… We hosted my parents and brother, a couple of New Yorkers who lived in Paris and have since moved to Amsterdam, and a couple who hail from Lithuania and Iran/India but have also lived in Norway and the States. Plus two mom friends and their babies, who were happy for the excuse to do something, as they’d been left alone for the day with their husbands at work—it’s just a normal week day here, after all.

While the majority of our guests were American by nationality, they all have so many varied experiences living all over the world, that it was as if we were all foreigners to one another—in the best way possible. We talked about traditions, foods, and news from the Netherlands, Norway, the U.K., France, Portugal, and more… it felt like we had all come together from the far corners of the Earth to share a big meal and some conversation and laughter.

For me, it’s the best way one could possibly spend a holiday… amongst the unfamiliar, sharing exotic stories, cultures coming together to share the best of what they have to offer. Life overseas opens up so many doors you never even knew were there—and that’s the magic of it for me.

As I say… nothing about the holidays overseas goes as you’d expect it to. And, I reminded myself on the day, no Thanksgiving is complete without some kind of story to laugh about the following year.