Home / Archives / Live And Invest Overseas Confidential / Holidays In Panama: What “Mes De La Patria” Is All About

Holidays In Panama: What “Mes De La Patria” Is All About 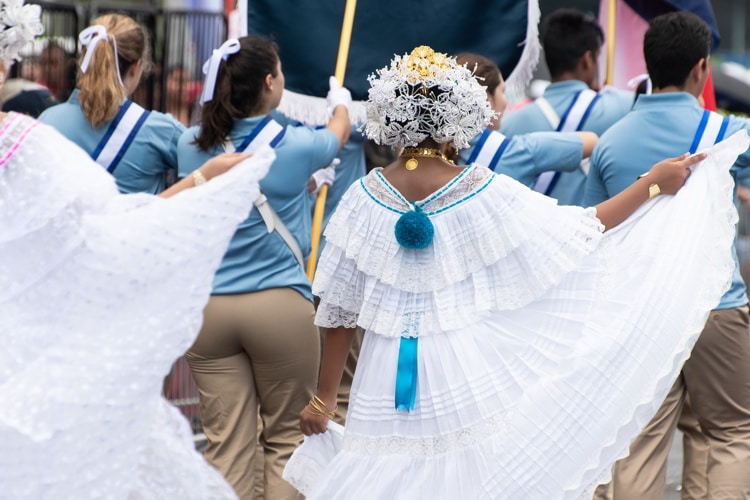 Holidays In Panama: What “Mes De La Patria” Is All About

Kicking Off The Holiday Season In Panama

Today, Nov. 1, is a holiday here in France, as well as in much of Europe, in many African countries, a few in the Americas, and in Russia… and it kicks off the season of holidays around the world.

Halloween: The Start Of The Holidays

Actually, Halloween really starts off the whole shebang—but Halloween is only a holiday because of the day that proceeds it: All Saints’ Day.

All Saints’ Day, also known as All Hallows’ Day, Solemnity of All Saints, Hallowmas, or Feast of Saints, wasn’t always in November… like most holidays, it was moved around to accommodate the traditional calendar of non-Christian holidays of the time.

The first recorded All Saints’ Day was May 13, 609 A.D., when Roman Emperor Phocas gifted the Pantheon to Pope Boniface IV, who then dedicated the day as a holiday to honor Mary and all martyrs.

In 835 A.D., the festival was moved to Nov. 1 and was expanded to include the honoring of all saints. The date was chosen with the intention of replacing Samhain, the Gaelic feast of the dead, that had always been celebrated at the end of the harvest season.

Samhain was a liminal festival, when the boundaries between our world and the “otherworld” were thin and penetrable, allowing spirits and fairies to pay visits to the living. Relatives were thought to visit their loved ones, and places would be set at the table for the living to dine with the dead. Gifts of food and drink were offered to honor and appease the spirits. Costumes might be worn to confuse the spirits and keep the living safe.

At some point, groups of costumed mummers began to go door to door asking for a small gift of food. This, of course, led to our modern Halloween traditions. And if not for the manipulation of All Saints’ Day, who knows if these customs would have survived.

All Saints’ Day is followed by All Souls’ Day, or the Day of the Dead, on Nov. 2, celebrated primarily in Mexico and Haiti. All three dates have become somewhat conflated over time… all influencing one another and the time of year.

The November Holidays In Panama

But if you happen to be in Panama in November, those holidays are the tip of the November iceberg. This week alone is host to three holidays in Panama: Separation Day on Nov. 3, Flag Day on Nov. 4, and Colón Day on Nov. 5.

These are celebrated to varying degrees throughout the country, but the 3rd and the 5th are national holidays. Public agencies and schools have the day off for Flag Day, and parades are held all over the country. And while it’s not a holiday for the private sector, many businesses stay closed… and those that open have most employees taking a vacation day to take advantage of a five-day weekend.

Next week on Nov. 10, Los Santos Uprising Day is celebrated with another bank holiday… and at the end of the month, Nov. 28 marks Panama’s Independence Day. But because it falls on a Sunday, the following Monday is another day off.

Needless to say, November is an important month in Panama. The whole month is called Mes de la Patria, basically translating to “Month of the Fatherland.” Most countries celebrate their most recent independence day, but Panama celebrates two of them—plus many of their surrounding events…

Panama was one of the first ports of call in the New World for Spanish explorers, many of whom settled in the territory. In 1519, Panama City became the first European settlement on the shores of the Pacific and the isthmus quickly became an important part of the Spanish Empire as a part of the Viceroyalty of Peru.

Over 300 years later, Panama gained its independence from Spain. On Nov. 10, 1821, the small town of Villa de Los Santos on the Azuero Peninsula made the first cry for independence, which is commemorated with Los Santos Uprising Day.

According to the tale, a young woman in the village led a crowd to the Spanish barracks shouting “Long live liberty!” This “Grito de La Villa de Los Santos,” the Cry of Los Santos, along with the march on the local Spanish seat of power, announced Azuero residents as free from Spain.

Until then, not all Panamanians agreed with the idea of independence, but the bravery shown by those of La Villa de Los Santos roused and unified the country, spurring on the official declaration of independence just a couple weeks later. On the 28th, at an open town meeting, Panama was declared a sovereign entity.

However, the fledgling country knew that it was one of the richest regions in the Viceroyalty and that Spain was unlikely to accept the declaration of independence without a fight. Young Panama sought protection from the Republic of Greater Colombia and agreed to become one of its departments in exchange for security from Spanish retaliation.

In 1831, Ecuador and Venezuela claimed their independence from Gran Colombia, and got the ball rolling, but it would take another 70-so years for Panama to find itself in a position to do the same.

In 1903, the United States started poking around Panama, the latest in a line of countries that sought a shipping route through this thin little isthmus. When Panama and Colombia disagreed on whether or not to allow the States to move forward with their canal plan, Panama seized its opportunity. With the backing of the United States, Panama declared its independence from Colombia on Nov. 3—a.k.a. Separation Day.

Colombia had 500 soldiers stationed in Colón to maintain control of the country, and when Panama claimed its freedom, Colombia ordered its local army to put down the rebellion and capture Panama City.

Without a shot fired, residents of Colón managed to persuade the army to stand down. If they hadn’t, it’s likely Colombia would have regained its hold on the country, which may have led to war… perhaps involving more than just the two countries, especially as Uncle Sam had vested interests at this stage. This bloodless victory is commemorated on Nov. 5, Colón Day.

Meantime, María de la Ossa de Amador, the soon-to-be First Lady of Panama, had been designing the potential country’s flag. She completed the flag on Nov. 1, but the holiday was created on Nov. 4 in order to bridge the other two days related to independence from Colombia and give everyone a nice long holiday to celebrate their nationhood.

Panama During The Holidays

If you’re living in Panama, it’s a party month—time off, parades, long weekends at the beach, fireworks, and drinking.

If you’re working in Panama, it’s a beast—nothing is open, meetings aren’t possible, emails are invariably autoreplies excusing the person’s absence more or less until December, and a general vacation attitude permeates the country.

If you’re thinking that Panama might be the new overseas home for you—and there are countless reasons why it may be—I don’t recommend testing out the theory in November. It’s the worst time to come to Panama. Aside from the nonstop holidays and the traffic from everyone going to and from the beach, it’s also the rainiest month of the year.

However, there’s a lot more to this fascinating little country than just its Mes de la Patria. After living seven years there, I can attest to its awe-inspiring nature—from the beaches and islands to the highlands and rainforest, there is so much here to be explored… If the tropics interest you, I encourage you to take a closer look at Panama.