Home / Archives / Live And Invest Overseas Confidential / Belize Geography 101: Where Should You Live In Belize?

Belize Geography 101: Where Should You Live In Belize? 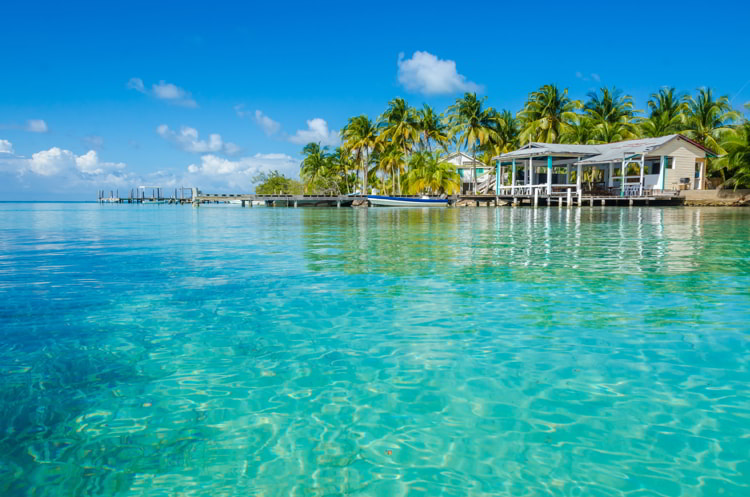 Belize Geography 101: Where Should You Live In Belize?

Discovering The Lay Of The Land In Belize…

“Where can I live that’s close to the ocean, has a killer view, is on a river and near the mountains, in a safe neighborhood, with great bars and restaurants, without too many tourists, where I can walk to snorkel, build my own yurt, and own a little farm, and all for under US$50,000?”

This is a common question you get if you’re regarded as a “Belize expert” and associated with the real estate business. There’s no way to answer this question simply… but people want an answer anyway.

Another inquiry I often get from potential new residents is, “I am coming into Belize on a cruise and have four hours to explore and do some house hunting. Where should I go?”

Again, people want a simple answer. But this country can’t be explained simply.

Let me prove this with a short geography lesson on mainland Belize. Don’t worry, there’s no test.

I won’t address costs here, but instead we’ll focus on the land. I also won’t address the islands—island life is another beast altogether.

See the lightly colored, bumpy looking area on this topographical map of Belize? That is the Maya Mountains. Almost nobody lives there.

The roads are bad, there’s no infrastructure, and it’s not habitable land. Much of this region is labeled as a national park or reserve, and it’s stunningly beautiful.

The rest of the country is mostly coastal plain or lowland. The border with Guatemala near the main town of San Ignacio is only slightly elevated at 250 feet (76 meters) above sea level.

All that green on the upper part of the country is pretty much sea-level.

The coastline is dominated by mangroves and swamp, so don’t imagine all this Caribbean coast as secluded beach. It would take a lot of time and effort to make this jungle into a beach. (That’s assuming you get permission to do that.)

Back to the habitable areas. There are reasons why everyone touts the Cayes, Cayo, Corozal, or Placencia—these are the places where it’s possible to live.

There are some villages that are worth exploring. For example, the farmland in Orange Walk, the coastal towns of Hopkins and Dandriga, and Punta Gorda to the south…

And there is Belize City, of course, but, as the Kriol saying goes, yo hang witt di daug yo ketch di fleas, or “if you associate with the wrong crowd, bad things can happen.”

When it comes to putting down roots, the popular choices are popular for good reason. 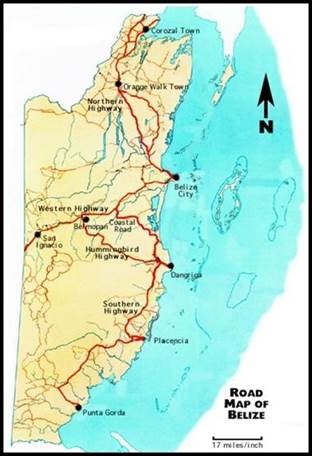 Let’s look now at a basic road map of Belize. It speaks volumes about the lay of the land…

The dark red lines are the highways. They are the only paved roads in the country outside of cities. Everything else is a dirt, rock, or potholed road that takes a long time to drive and takes a toll on your suspension and tires.

The living can be great out there… but you better be ready to move slowly. Take some advice from neighbors on Caye Caulker and remember their motto: “Go slow.”

I live in Santa Familia, a small town between San Ignacio and Spanish Lookout. It’s a great place to live, but I am never in a hurry—I can’t be. And my town is only 7 miles from anything else in either direction… if you get any further off the beaten path, you’ll need more patience than I have.

That said, a massive road improvement project is going on throughout the country right now, with the government of Belize using petroleum company money on country infrastructure. We have high hopes.

No matter where in Belize you go, you’re sure to notice that it’s wide-open and undeveloped. This is a country with swaths of open land, farmland stretching to the horizon, few buildings, few people, and just… nothing. It’s kind of wonderful.

Belize has only 350,000 people in an area the size of Massachusetts. I just came back from a week vacation in El Salvador, which is almost the same size and has a population of almost 6.5 million… there were still a lot of wide-open spaces there.

For most, trips to Belize start at the international airport, which sits just north of Belize City in Ladyville. It’s just over an hour’s drive north to Orange Walk Town and then just under an hour to continue north to Corozal Town.

From there, it’s just a few more minutes to the Mexico border and Chetumal. You’ll find vast farmland and cane fields in this area leading up to the seafront and fishing villages from Corozal to Sarteneja.

To go southward in the other direction, it’s a two-hour drive to Dandriga. You take the Western Highway all the way to Belmopan to pick up Hummingbird Highway to go south.

The Coastal Highway is no highway, other than in name. Even Google Maps, which wants to send you on the shortest route, doesn’t recommend it.

Moving on to Placencia, it’s another one-and-a-half hours. “But it doesn’t look that far,” you may be thinking, looking at the distance on the map above… Yup, welcome to Belize.

It also doesn’t look that far, moving southward to Punta Gorda, but that takes another two-and-a-half hours. That brings us to a total of six hours from the airport to Punta Gorda. That eager cruise passenger won’t get to see much on his four-hour disembarkation…

The third drive spur is to take the Western Highway all the way near the Guatemala border. This takes you through the capital of Belmopan, just over an hour from the airport. Belmopan is growing, but I don’t understand the appeal.

You continue past on your way to San Ignacio, just under an hour more of driving. The landscape changes here, and this becomes one of the nicest drives in the country.

Parts of the Hummingbird Highway are the only real scenic driving on the highways, and you get it without interruption between Belmopan and San Ignacio.

If you go back to the original question that wraps up that perfect spot, the answer is that it doesn’t exist. The topography is varied, and the lowlands and mangroves don’t lead well to such things as panoramic sea views or unspoiled beaches.

Mountains? Yup, you can have that. Walk to snorkeling? Probably need to look at the Cayes. River and farmland? Just about anywhere you look. Placencia is probably the only touristy spot on the mainland.