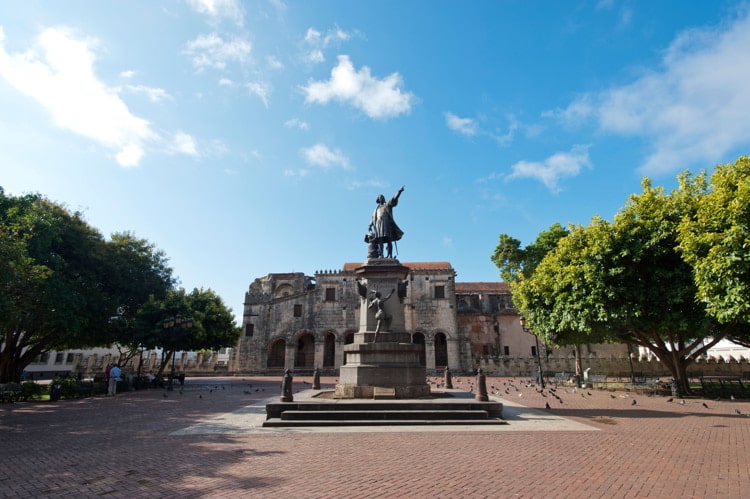 Sophisticated City Living In The Caribbean

White-sand beaches, swaying palm trees, warm turquoise water, year-round sunshine—you’ll find them in abundance here in the Dominican Republic… and, of course, pretty much everywhere else in the Caribbean, as well.

What sets the DR apart from other Caribbean islands and nations is its more sophisticated lifestyle—one that is strongly European.

Santo Domingo is a perfect example of this.

A Little Bit Of History First

Established in 1492, Santo Domingo predates all other historic, colonial cities in the Caribbean.

It’s the oldest European city in the Americas and the capital of Spain’s first colony in this part of the world. It’s the Caribbean’s only medieval Spanish city and a truly cosmopolitan capital. It has plenty of history and culture, diverse dining options, entertainment, and modern shopping along its cobbled streets. In this capital city, you can enjoy theaters, museums, and stadiums (béisbol is a national obsession).

Founded by Christopher Columbus’ brother Bartholomew, colonial Santo Domingo might best be described as dignified. It feels more genteel than the cities built in other of Spain’s colonies in the decades to follow.

The structures at the heart of this old town are classic Spanish colonial but simpler, statelier, and somehow more refined than their counterparts across the region.

Calle Las Damas, the first street of the original city and therefore the oldest street in all the Americas, is lined with 16th-century pale stone facades and runs into Plaza de España, the expansive open square at the harbor.

The highlight here is the colonial city’s first palace, the private home of the first governor of the colony, Diego Columbus, Christopher’s son. It’s an exceptional example of classic Spanish-colonial architecture.

Diego’s viceregal residence marks one edge of the Plaza de España, at the water. At the square’s other edge, alongside the old town, is a row of restaurants where you can dine al fresco and watch modern-day activity in this harbor that helped build the Americas.

In colonial Santo Domingo, Bartholomew and Diego created an administrative hub for the activities their sponsoring country imagined for the New World they envisioned. It was from this base that the Spanish managed their conquests of Mexico, Puerto Rico, Cuba, Guatemala, Peru, Florida, Colombia, and Jamaica.

In colonial Santo Domingo, the Columbuses built a customs house, a hospital, a cathedral, a university, a library… everything required to launch a new Spain.

During its golden age, this city’s colonial structures stood as testament to the riches flowing through their benefactors’ coffers.

The extensive Zona Colonial, a UNESCO World Heritage site, offers countless Spanish colonial buildings—interesting prospects for both investment and lifestyle—plus, it hasn’t yet become populated with expats like many of the typical colonial city options.

From real estate to the general cost of living, it can be hard to believe you’re in the Caribbean when here. Prices across the board are more Latin American. You could live well in the DR on your monthly Social Security check alone.

There certainly is no lack of entertainment in Santo Domingo, particularly in the Piantini district, which has several good malls, theaters, and fantastic restaurants. For the best sight-seeing, the Colonial Zone is not to be missed. Visiting Parque Colon is something residents never tire of, and you’ll find several galleries and small museums throughout the city.

If you’re looking for upscale activities, Santo Domingo is home to the National Symphony Orchestra of the Dominican Republic (Orquesta Sinfónica Nacional), which hosts many events throughout the year.

Not to be missed is a meal at Pat’e Palo. The eatery was established in 1505 by a retired one-legged, one-eyed pirate and is located across a courtyard from the Columbus family home… it’s a truly unique Dominican experience.

You should also take a jaunt to the Columbus Lighthouse, a fascinating structure said to contain the remains of Columbus. The famous explorer was a voyager even in death; his remains were moved from Spain, to Santo Domingo, to Cuba, and before finally coming back to rest in Spain.

…But in 1877, a lead box with the inscription “Don Christopher Columbus” was found in Santo Domingo, giving rise to speculation that some remains were actually kept in the country. The remains in Spain have been DNA tested and concluded to be Columbus’, but historians agree that some body parts may have been kept in the DR, hence this coffin. Regardless, the coffin and whoever lies inside is on view in the mausoleum, and the structure also houses a museum.

As Kathleen says, “I’ve been hanging out in New World cities that Spain built for a long time.

“Over the past 35 years, I’ve gotten to know old towns from Granada and León, Nicaragua, and Cuenca, Ecuador, to Old San Juan, Puerto Rico, Antigua, Guatemala, and Casco Viejo, Panama…

“But it’s Santo Domingo, as I’ve gotten to know it over the past few years, that has captured my imagination. I appreciate its history, its architecture, and its café culture.”

We’re counting down to the opening of registration for our 2021 Live and Invest in the DR Conference,

And, as always, as a LIOS Confidential reader, you’re eligible for US$50 off the cost of entry.

If the DR sounds like it could be your future home overseas, I hope to meet you there in person next year!

Meantime, go here now to get your name on the list to receive first notice and a chance for special additional savings.